The principles of Table Tennis are vague and it is not known for sure when it was first practiced. We can say that it was in the 1870s when our sport emerged in England as Tennis derivative. Tennis Club, in the face of bad weather, may have created a small type of tennis using a pool table or dining room table, in a Tennis Club, and split it into two pitches with books or rope at a time. same.Some of the numerous models that exist for children’s games would serve as balls, or even a suitably adapted cork. The paddles would be covered in baby cigar or bat boxes. Undoubtedly the legend is mixed with reality. For this version they follow GERALD GURNEY y RON CRAYDEN, two outstanding scholars in the history of Table Tennis. College students quickly embraced the parlor game across England. In 1884 the signature FH AYRES LTDA. he was already trading a small Tennis Parlor Game. “In July 1890 the industrialist YORKSHIRE, David Forster patented Board game for the living room“, a table surrounded by a kind of fence to keep the ball within limits, with no evidence that it was commercialized. One of the first tours in Germany (1901). Moderne Kunst. In 1891 Jhon Jaques, manufacturer of goods sports, a game called SGOSSIMA was patented “, which was not accepted. In 1891 Charles Barter, as GLOUCESTHERSHIRE, registered a patent with cork balls, and about the same date James Gibb, founder of the famous AAA athlete, made a material consisting of a net attached to two posts and a wooden surface raised from the ground, while composing game 21 he has points and rubber balls. Gibb discovered small celluloid balls in America, and immediately successfully introduced the game. Wiames Gibb He praises name ping pong for the firm Jhon Jaques LTDA., which registered the name. The name comes from the sound of Ping made by the celluloid ball while hitting the parchment-covered paddles and the sound of Pong when the ball touched the board. These parchment paddles had a 45 cm handle. of length. In 1899 the Ping-Pong was very popular in England, even being exported by the firm of Jonh Jaques, Ltda., To the Indica, South Africa and Australia. At this time, competitive manufacturers Jhon Jaques Ltda., An WHIFF WHAFF and the FLAN FLIN, but a name Ping-Pong prevailed.

In 1899 a 14-year-old student in the Satffs School, AG FINNEY, he invented a short-handled paddle covered with parchment, bringing a number 17.5 cm into the game. High. Also this year the young Londoner starts playing PERCY BROMFIELD, which in turn played a decisive role in the imposition of English and world Table Tennis. The biggest enthusiasts in the new game were the equestrian sports men and thus great tennis players like JG RITCHIE and CG EAMES were Secretaries on Table Tennis Clubs, after writing books about this sport. 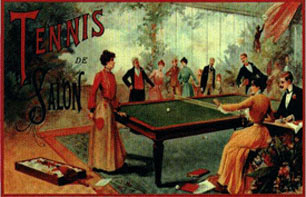 They were held in England as early as 1901 Ping-Pong Tournaments with participation of up to 300 players and cash prizes of up to 25 pounds. This year the Ping Pong Association, which distributed about 500 players of 39 Clubs nationwide. In these early dates the service was performed just above the net, like tennis, at a height of 17 cm. and 17’5 cm., variable. Doubles Games was named “Four Hands Game”. Ar BRANTHAM ESSEX According to information at the time, tons of celluloid balls were produced per week (about 2 1/2 million units), which were distributed worldwide. In 1902 the weekly newspaper named after him TABLE OF PIONEER TENNIS (Pioneer of Table Tennis), which in the same year boasted that it reached a figure of 20,000 readers. Also in 1902, about 20 books with instructions for the game were published in England and the United States. The leading English players of the time, who would play a major role in the evolution of world Table Tennis were A. PARKER, P. BRONFIELD, PE WARDEN, GJ ROSS, JJ PAYME, J. THOMPSON, GOOD CE Y. AG FINNEY. The first stippling covered with rubber or rubber was patented Frank Bryan in 1901 and sold under the name “AtroposThis type of paddle accepted universally almost for many years. The aluminum paddle also came out, guaranteeing great speed, but it was very expensive and not sold. Ayres and GG Bussey made corded paddles, such as tennis paddles, in detail. They were very carefully manufactured and used very tight and high quality laces, but had the disadvantage of not offering good control of the ball and were banned in many tours, probably because they did not produce they make no noise. The primitive celluloid balls were too light and also had the disadvantage that, since they were manufactured in two parts that were later assembled, the joint produced a very inconsistent boat. I 1,900 Jaques Ltd.. did a seamless cellulose ball and normalized in size and shape. The ping pong balls were getting harder and also increased in size, a circumstance that facilitated a quick game. The accessories to play, other than the paddle, were sold in cases made primarily in England and the USA. 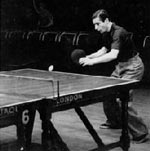 In 1922 the new sport was already known in Sweden, France, Wales, Central Europe, etc. controlled in these countries with regular championships played. In 1926 the English Table Tennis Association was established with new rules and statutes, electing Ivor Montagu as President and Bill Pope as Secretary. When this Society was founded, Montagu and Pope took on the task of organizing the First World Championship in London, which was a great success and financially resolved in 1926 with a loss of 300 Pounds. The idea of ​​the above Championship arose from the event of an International Competition organized by Dr. Lehmann in Berlin, with the participation of the Germans, Austrians, Hungarians and English. In this Competition they talked about the need to set up an International Table Tennis Federation on a temporary basis and organize a World Championship I and a Conference, both in London. When the Conference takes place, the International Table Tennis Federation (ITTF), Appointed by President Ivor Montagu and Secretary Bill Pope, who would remain there until his untimely death in 1950.

In this regard the first World Championship Montegu’s mother, Lady Swaythling, presented the Cup after her name, to compete at the Men’s Teams. Hungary, Austria, England, India, Wales, Czechoslovakia and Germany participate. In principle, the name was not the World Championship, but it was eight Indian players, who actually lived in England, who led the organizers to give it this name. The female participation was very low, as it was reduced to 14 players: 11 English, 2 Austrian and 1 Hungarian. The Hungarian representatives had the overall victory in these first Championships, which rose with all their victories. The Championship was played at or tables, and the height of the net was 17 cm, which the defensive player liked, limiting practically all participants to send the ball to the other side of the net in one defensive attitude. The Organization of this first Championship recommended that the players should not wear white garments, but did not prevent the clothing from being unattached, as the men also wore long trousers, long-sleeved shirts and vests, and even in some cases ties, and women long skirts and ordinary street dresses. The first decision made by the London Congress was to try to control the rules that prevailed in the Table tennis. In World Championship I, teams played 21 points per game and the best of three games, while in the singles the best of five games. The lTTF officially makes two different systems for 1927: the system for counting up to 21 points in each game defended by the English, and the Outdoor Tennis system in six-game sets, a system proposed by Hungarians, Austrians and Germans. In January 1928, during the World Championships held in Stockholm, the decision was made to unify the system and count up to 21 points. With the celebration of World Championship I. and the London Conference, one phase closes and another phase begins With: Javier Quintano Muñoz (Javier Quintano Muñoz was president of the Spanish Table Tennis Federation. This article was taken from the special edition by Arriaga News – edited and published by Sporting Alavés – published in February 1992 (No. 15), taken from the Official Table Tennis Journal of the Spanish Table Tennis Federation)